Visiting Gunillaberg is like stepping into a new world. Suddenly appearing out of the dense Småland forest are open fields, picturesque Carolingian buildings and floral installations in every conceivable colour and shape.

Cows and horses amble in green pastures; pot-bellied pigs and goats seek shade. The rooster crows repeatedly. Everywhere in the large garden, there are cast sculptures and outdoor furniture, some gigantic and ornate, others small and finely carved. Tage Anderson, the owner and proprietor (as well as one of Europe’s greatest floral artists), stands in the middle of the farm and gazes out. He wears brownish-green carpenter trousers and sports a generous beard. We shake hands and go into the small kitchen where the farm café’s loaves of bread are baked, sit down at the table and start from the beginning. 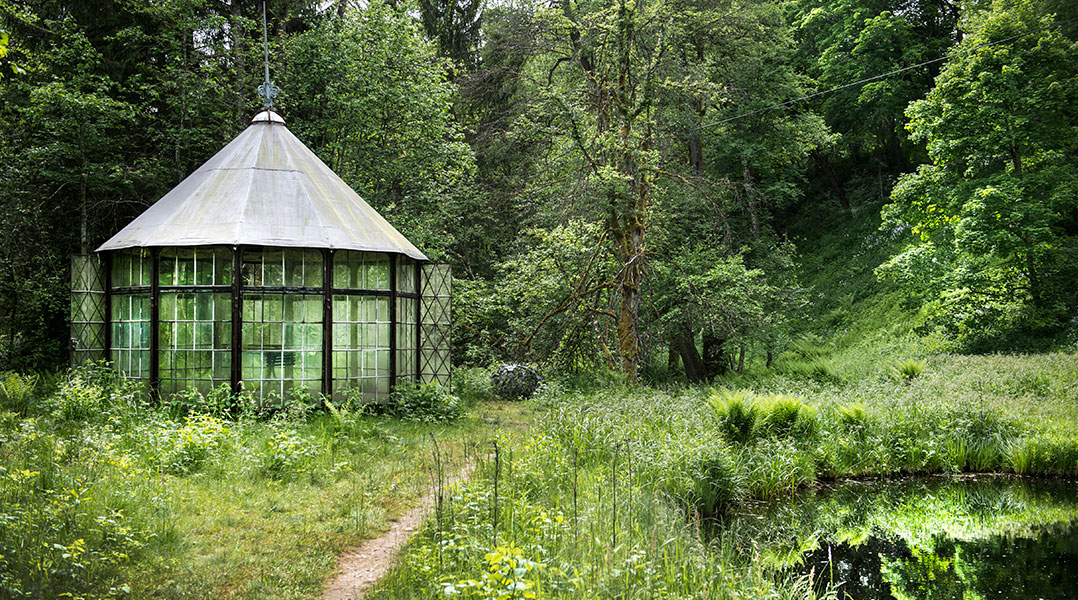 “Gunillaberg was built in the 17th century,” Tage says. In the beginning it was a hunting lodge for Queen Christina, but she later gave the farm to Johan Printz, who came home after a period as governor of the New Sweden colony in North America. When he came back from abroad, the farm had completely caved in since it had stood empty. He rebuilt it from scratch, and the buildings that he constructed at the end of the 17th century are in fact what we still have today.”

It is precisely the combination of old and new that gives Gunillaberg its charm. The main building, the Johan Printz yellow 17th-century house, is filled with modern art of all sorts: paintings, sound installations and artistic furniture made of various iron materials. Out on the farm, animals, flowers and gazebo share space with creative sculptures. Even the WC, a combination of an old-fashioned outhouse and modern bathroom furnishings, resembles an installation. Some of this has been made by Tage himself; others by various Danish and Swedish artist colleagues.

“I like having so many possibilities here. It’s a fantastic place. The buildings are really excellent, the garden is wonderful, the nature is beautiful. I love animals, and there’s room for them here. We have about 150 of them, and they are a large part of the ambience. It is a big contrast with my everyday work in the shop in Copenhagen, which is in the heart of the city. Here we are in the middle of nothing. I’m always working with contrasts. 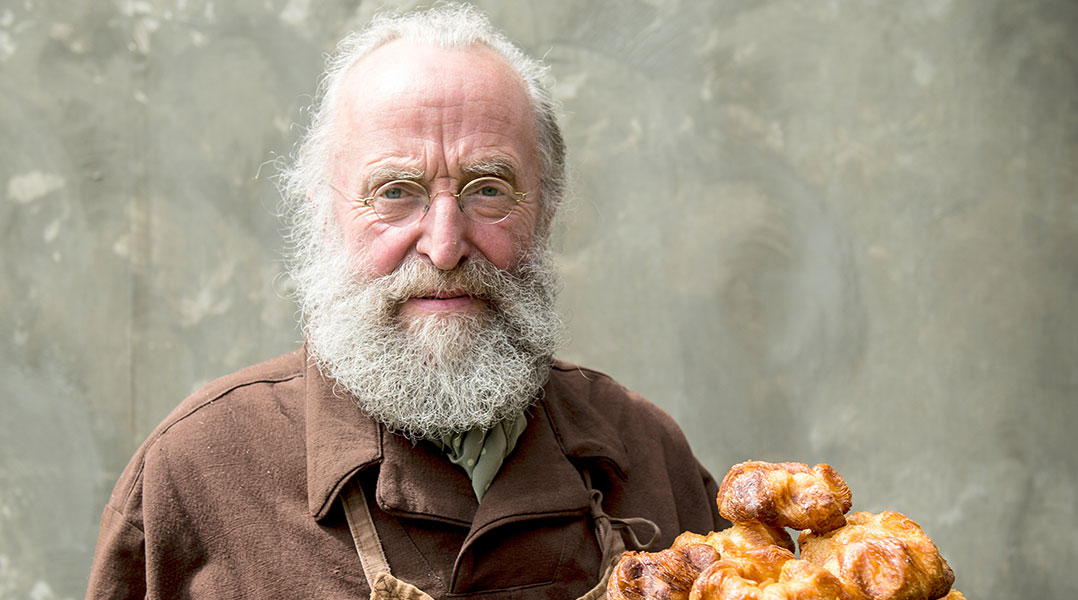 “I was looking for a farm when I saw extremely professional, full-page photos of Gunillaberg in an ad in the paper. I thought it was incredibly fine and decided to come here and take a look. Then I travelled back and forth between Copenhagen and Gunillaberg several times in a short time, and within a week I had purchased it. The time for deliberation was very short.”

In addition to the garden, architecture and visual art, Tage also arranges concerts in the farm’s newly built orangery. In the summer ballets, baroque concerts and scaled-down opera duets are presented by musicians and dancers from throughout Europe. Those who wish can enjoy the performances over dinner prepared by star chefs such as Niels Meldgaard and Claus Christensen. 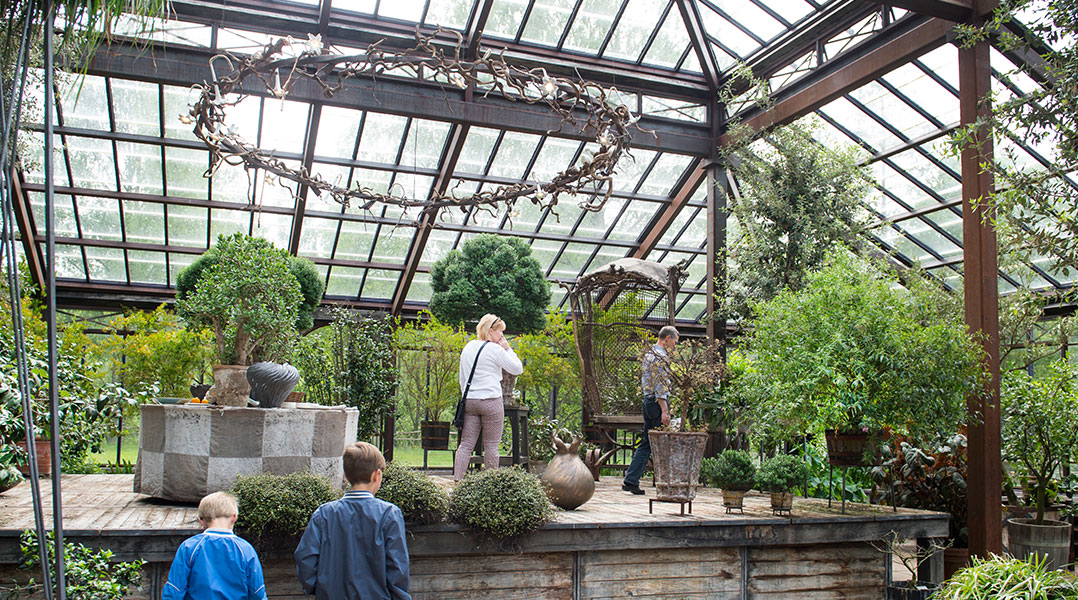 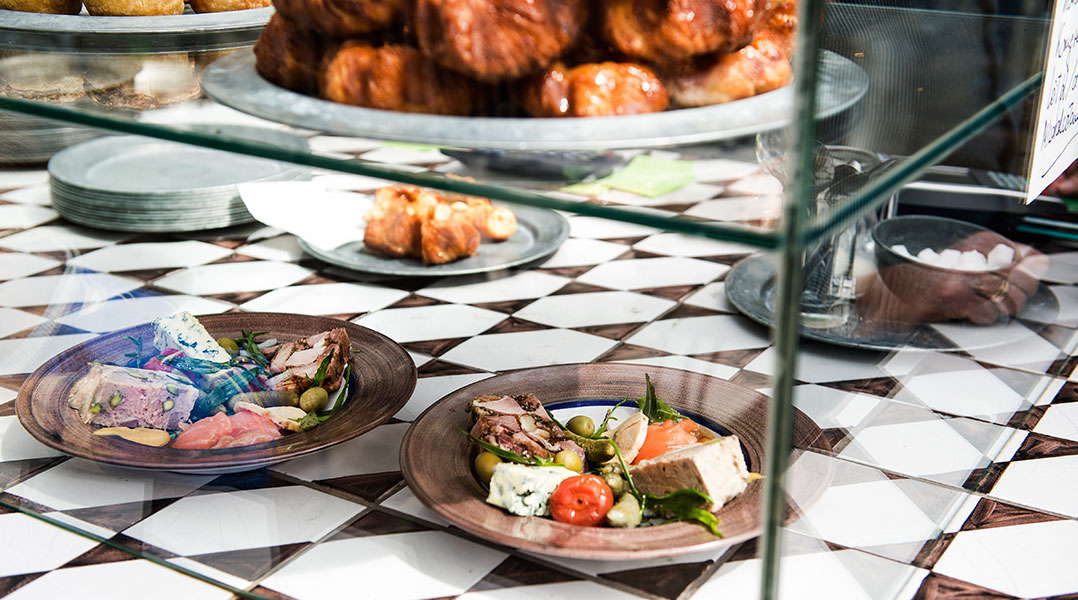 “Art in all of its manifestations is simply something I like, and I want to display it so that others also can revel in it. All of the different forms of art interest me a great deal. I want to mix them together and create a fine totality. A lot of things should be happening so that everyone can be satisfied. If there’s something you don’t like, then you can simply go on to something else. Gunillaberg is experiences. That’s what it’s all about.”

Tage shows me around the farm. We begin in the main building where a number of Danish and Swedish artists rub shoulders with his own work. Abstract paintings in all possible colours and sizes, ingenious iron and wood furniture, large white sculptures. The floor and ceiling are painted in stimulating motifs and patterns, and in the background piano music resounds. 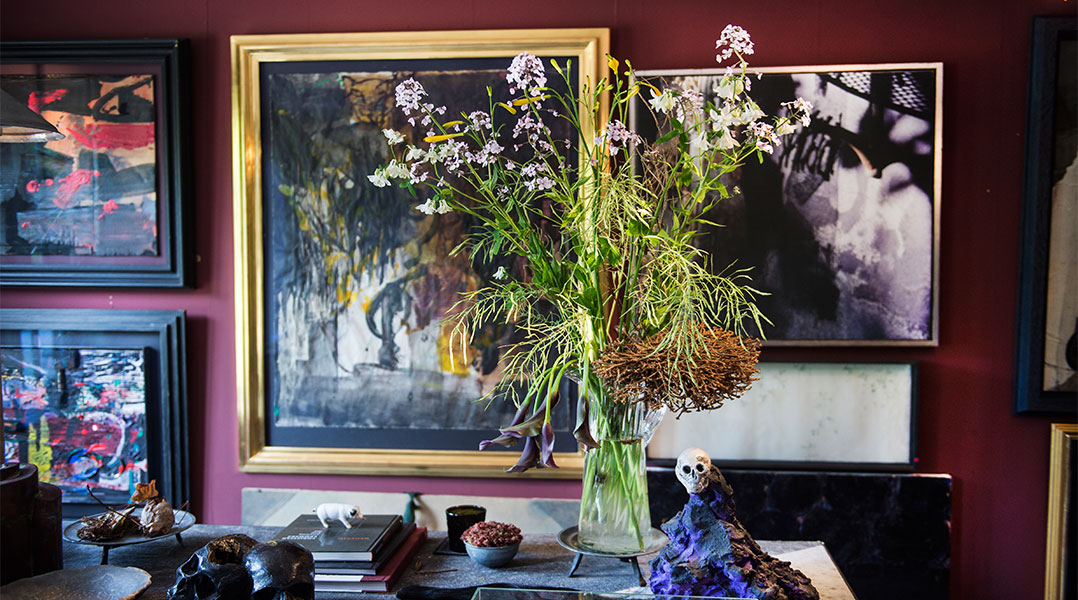 “The main installation was made by one of the greatest Danish artists, Christian Lemmartz. He does a great many different things, large paintings and beautiful plaster sculptures. Other artists we have installed here are Peter Bonde and Anna Kinman. We also have concerts here sometimes if it is a small ensemble that does not fill the orangery.” One-room exhibitions – which include a gigantic chess set made by Tage and the previously mentioned Malmö sculptor, Anna Kinman – are designed as if they were part of a dwelling. Pictures hang in the bedrooms, bathrooms and living rooms. The idea is to suggest a place where people live, a modern version of the Johan Printz 17th-century house, if you will. When we come out to the farm, Tage points down toward a large watercourse. “We have water around all of Gunillaberg. The nature is unbelievably beautiful here. It is ... how do we put it in Swedish? "Romantiskt".

A little farther away we stop by one of the farm’s most noteworthy places: the lily field. For some time to come, the flowers will remain ensconced in their green stalks, but during August about 3,000 lilies blossom in fragrant brilliance. It is one of Tage’s favourite places on the farm, and he shares his fascination with flower connoisseurs from throughout Europe. In the newly built orangery, the wind ceases to howl. Clustered in 400 square meters is a large collection of bushes and trees, which add a tropical dimension to Gunillaberg’s atmosphere that is in all other respects intrinsic to Småland. Tomorrow, however, everything will be pushed aside to make room for 150 chairs oriented towards the premise’s central stage. Cellist Andreas Brantelid is going to present a concert. It’s hard to imagine more vibrant or inspiring surroundings in which to listen to music.

We continue on, passing large, symmetrical baroque pavilions before we reach the pastures and animals that Tage has talked about so warmly. 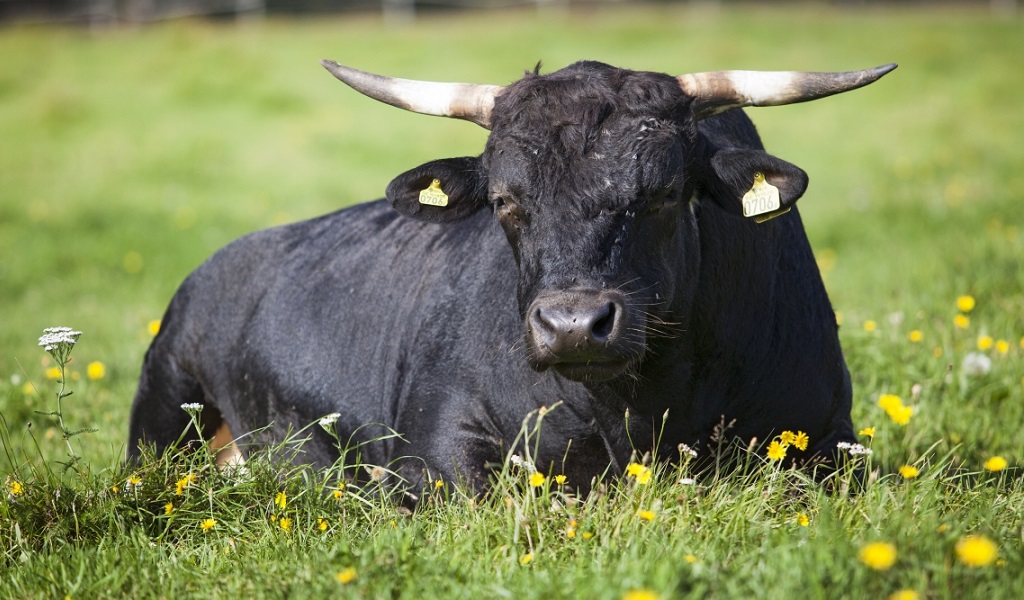 “We have about 40 pot-bellied pigs. They lie in the sun and rest, and the goats as well a little farther away. Our horses recently have foaled. The horses are something of an attraction. It’s not often you see such large and beautiful horses.” With their long, white manes and golden brown coats, they repose in the shade of a tree. When Tage calls to them in his broad Danish-Swedish accent, they trot slowly towards us. “This is Kiri and Katja. The colts are called Klara and Kasimier. They grow so fast it’s astonishing.”

The guided tour is finished and Tage has to move on to other things. There’s a lot to attend to at Gunillaberg at this time of year. When I ask if he wants to add any concluding words, he ponders for a moment and then looks up. “Gunillaberg is something one must experience. You can’t just take a quick look, smile and say ‘Yeah, okay’, but you have to allow time to experience the mood and the atmosphere. The entire place is made for experiences so you have to dare to feel them. That’s the most important, I think.”

A delightful garden where you can feel the pulse of history

Pine trees that are up to 400 years old

Inspiration for your garden

Stadsparken – a park for everyone

Great trip for the family